Court Reporters, Legal Videographers a Thing Of the Past?

With a budgetary crisis looming, the courts have been looking for ways to save money, and court reporters are on the hit list. While digital recording systems, such as the “FTR,” by ForTheRecord, are being used by many courts, the resulting audio file is of little value to an attorney needing to quickly locate where something was said – assuming you can get a copy in a timely manner. In order to be of any real value, you’d still have to have it transcribed, and without the benefits of getting a read-back, or of someone intervening when things get out of hand, such as attorneys and witnesses speaking over each other. There may be a better alternative now, first released at an Expo on 5/25/2011, presented by Jim McCranie, President of Visionary Legal Technologies.


Visionary has been around since the late ‘90’s, and was actually the first company to develop transcript-sync-to-video software, according to McCranie. They offer a large suite of applications, and are probably best known for their trial presentation software (currently Visionary 8). The two new applications covered at the Expo were VDR (Visionary Digital Recorder) and VST (Visionary Speech Transcript).
Disclosure: I occasionally receive copies of various software and apps for review, and in this case, my travel expenses to attend were covered by Visionary.
I will share a brief overview of the technology, followed by my opinion as to how this might affect Court Reporters, Legal Videographers, Lawyers, and the rest of the free world. I’ll also include a statement from SueLynn Morgan (Past President of the National Court Reporters Association), who was also in attendance. 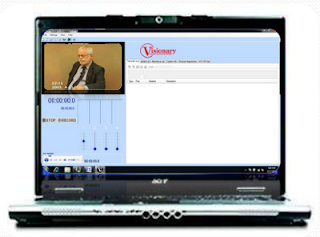 VDR
VDR is essentially a sophisticated method of capturing the audio, and a “draft” copy of a video. In addition to the software required to manage this, they also offer a hardware kit that has everything you’d need to get started – even down to the laptop, camera, audio mixer and power strip. While they offer the kit as a convenience, they expect that many will simply duplicate the pieces needed – especially if firms are purchasing more than one kit.

VDR does not produce a transcript – it is only a digital recording solution package. Is it a threat to professional Legal Videographers? It could be, in some instances. However, since the camera is only an HD “web-cam,” there are some serious limitations with respect to the quality and control of the video recording process. While this video file may or may not be suitable for courtroom playback of depositions, it could certainly add the video element in low-budget cases or other non-legal events.


Instead of using the “draft” video as the final product, users are encouraged to supply the draft video as – well – a rough draft of the depo. In cases which have the budget for a professional videographer, one should still be used. The web-cam is not going to match the quality of a “real” camera, and it won’t be able to easily zoom in, shift focus to another subject, etc.
One of the big features that I saw with this is the fact that if four microphones are used, rather than merging all of them into one audio track, it actually creates a 4-track audio recording. For example, if you needed to hear what the deponent said as an attorney was shouting, “Objection,” you could easily isolate the desired track.


VST
VST does indeed create a form of rough transcript, which is created “live,” as the deponent or attorney is speaking. There is also a viewer available, which allows an attorney to watch the scrolling text, in a similar fashion as with real-time transcription, and allows notes and “quick-marks,” a generic mark on a transcript which flags the transcript for later review, similar to other real-time transcript viewing software.
The accuracy of the transcript was incredibly high. Voice recognition has really come a long way in the last couple of years. In any event, it’s not a garbled mess by any stretch – the resulting “rough copy” of the transcript is a very accurate rendition of the depo. If there is a down-side, it is that it will not assign page and line numbers which will correspond with the final transcribed version (if that happens). So, any notes taken, or comments flagged, will need to be located via text search, rather than by page:line designations. There is a comparative sample set available on the Visionary site.
The operator can also (and is encouraged to) take copious notes during the depo, especially in any instances that might later present a problem, possibly due to a word which might be taken out of context (like “soul” instead of “sole”). The operator can also provide a “play-back,” as opposed to a “read-back” of a portion of testimony. Microphone levels are adjusted for each person, and channel numbers are assigned, so as to help in isolating each speaker.
Software Intelligence
Now, the most interesting part of this (at least in my geeky mind) is the fact that the software “learns” both text patterns and associated audible speech patterns. These are referred to as “profiles,” and they can improve with each deposition volume of a deponent. VST comes pre-loaded with several profiles, which are specific to certain types of cases or individuals. For example, if you are working on an asbestos case, you can load the asbestos profile, which will help the software in its word selection process. The resulting transcript may then be added to your own “asbestos profile,” helping the program to “learn” more about the vocabulary in cases you’re handling. Also if a second videotaped depo of the same person is used, the speech patterns joined with the synced transcript of the first volume, identified as a profile, will also help increase the accuracy of that particular deponent.


VST incorporates the Nuance speech engine, but the way they use it is unique. Over a period of time, the software will become more and more accurate with respect to vocabulary, and as additional cases are offered into the public domain, the base profiles will also improve.


So, Visionary is not limited to a specific proprietary vocabulary, such as that of Nuance’s Dragon, but rather has imported relevant text from transcripts, websites, and other sources. This is indeed a unique approach, and it can be far more useful than just a digital recording, which you’d have to play like a cassette tape, in order to locate something. I’ve had that happen in trial, when we’ve asked for a daily transcript. Not a great solution. Our only options at the time were either hire a Court Reporter to come in and provide real-time feed, have a transcriptionist create a transcript from the recording (which would take too long in this case), or just deal with it.


A Comment From NCRA Past-President SueLynn Morgan
“We know that realtime stenographic reporting is the gold standard and it’s no secret that there are alternative technologies for making the record. Visionary’s product using speech recognition could potentially be an opportunity for the deposition market and freelance firm owners to expand services they offer to attorneys. I’ll continue to watch the rollout of the product with great interest.”
Conclusion
Will VDR and VST replace the Court Reporter? In cases where budget and/or Court Reporter availability are an issue and a rough copy of the transcript will suffice, the answer is probably yes. In other cases, a Court Reporter or Transcriptionist will still be needed to create a final and/or Certified Transcript.
Will VDR and VST replace the Legal Videographer? Once again, in matters that wouldn’t otherwise warrant hiring a professional videographer, this can provide a cost-effective alternative. If you want to make sure to catch everything, varying the image occasionally, or perhaps zoom in on an exhibit, you’ll still need a Videographer.
Since the software is sold as an item, and not a service, while it’s not cheap, it could result in lower costs to the law firm, and at the same time, higher profit margins for the Court Reporting Agency. In the proper setting, this may indeed be a cost-effective alternative to a Court Reporter and Legal Videographer – at least for a rough draft.