Jurors and Technology in Trial: What Were Once Vices Are Now Habits

The recent legal defense of actor Robert Blake included heavy use of trial technology. While the prosecution relied upon “old-school” trial presentation techniques, including the use of posterboard blowups, printouts of documents and photographs, criminal defense attorney M. Gerald Schwartzbach chose other alternatives. For the first time ever, he used high-tech tools in his trial presentation.

Then, in the recent high-profile criminal trial of Dr. Hootan Roozrokh, Schwartzbach once again gave jurors the opportunity to “see” the evidence by visually presenting the case in much greater detail than the prosecution. Considering common clichés such as “Seeing is believing” and “A picture is worth a thousand words”, is it possible that the outcome of a trial may be influenced by the methods used to present the evidence?

Given these two cases tried by Schwartzbach, one might expect a Los Angeles jury to be accustomed to high-tech trial presentation, but the same may not be true in San Luis Obispo, a small Central California city located about an hour and a half north of Santa Barbara. Is your next trial venue accustomed to trial technology?

Consider the case of Shropshire v. City of Walnut Creek, CA, a precedent-setting case in which an Olympic-hopeful diver was paralyzed after an accident during training in which he landed on top of a synchronized swimmer who had been training in the same pool. It was the first time that the San Francisco plaintiff’s firm Abramson Smith Waldsmith had incorporated technology into their trial presentation. It resulted in an award for “Most Innovative Use of Technology In a Trial,” not to mention an impressive $27.5 million dollar verdict. While Walnut Creek is less than an hour from San Francisco, this was one of the first times technology had been used to this extent in that courtroom.

In each of these three case examples, the jury has spoken. Each contains a valuable lesson on how technology may have helped jurors reach their verdict.

Schwartzbach inherited a complex case in the murder trial of Robert Blake , and quickly realized the difficulty in managing and presenting a large collection of exhibits, photographs and recordings. His jury consultant suggested bringing in a trial technology consultant.

At the first meeting, Schwartzbach saw what could be done with trial presentation software (e.g. TrialDirector) to assist in efficiently presenting evidence. He was convinced that a tool like TrialDirector would help keep the jury focused and engaged in what would likely be a lengthy three-month trial.
Defense attorneys often face the difficult task of trying to level the playing field when many of the prosecution’s witness are sworn law enforcement officers. This case was also part of the focus of a book released just prior to the trial which could potentially have a significant impact on improving the image of the LAPD. Schwartzbach needed to be prepared for any opportunity to impeach the prosecution’s witnesses – especially any officers involved in the investigation. 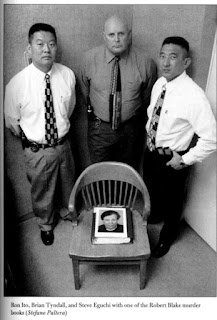 This photo exhibit, taken for publication in a book shows the three detectives assigned to the Blake murder case.

At one point during the trial, Detective Steve Eguchi (above right) was being questioned about whether or not he was near or had climbed up on the dumpster in which the murder weapon was later found (after being removed from the scene, dumped and spread out for inspection at a nearby landfill). He denied having been near or on the dumpster. Schwartzbach had the photograph of the dumpster scene displayed on the big screen for the jury. 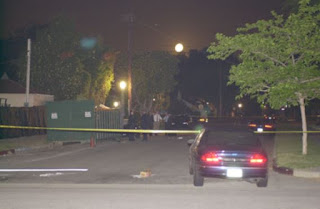 After making sure that Eguchi was sticking to his story, he zoomed in on – guess who? 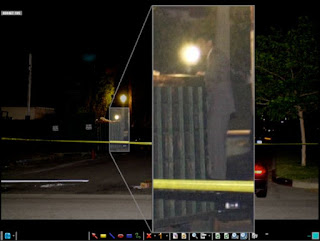 Detective Eguchi quickly confessed in front of the jury, stating, “Yes, I guess I was there.” It seems that neither the LAPD nor the DA’s office had realized that Eguchi was in the photo, nor did they have the capability to show it in court. Needless to say, there were smiles on several jurors’ faces at this point. Passing a small photo in front of jurors certainly would not have had the same impact as the big screen zoom. Robert Blake was found not guilty on all counts.

Dr. Roozrokh was charged with hastening death by over-medicating a potential organ donor in order to harvest his organs. This was an extremely important case of international interest – the first of its kind, which could have a serious impact on the future of organ donor programs.

From the opening statement, the District Attorney chose to show jurors how many bottles of morphine were allegedly used to over-medicate the donor. She placed a number of actual morphine vials on top of the witness stand – something she later repeated with a witness on the stand. It was a very slow process opening each box, placing each vial upon the table, attempting to count (and recount) each one, and occasionally knocking one over. A single 10mg morphine vial at twenty feet appears very small, and it would certainly be difficult to have a good perspective of a large number of them at a distance.

Mr. Schwartzbach wanted the jury get a clearer picture of the concept. One expert witness had testified to having knowledge of cases where as many as 5000mg were used in end-of-life situations. It certainly wasn’t an option to acquire and trot in a large case of tiny bottles to spread around the courtroom. Importantly, the case included an issue regarding 200mg of morphine.
A demonstrative exhibit was created to depict 200mg of morphine: 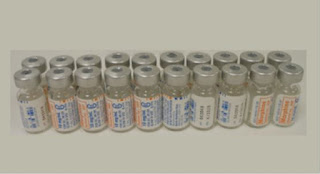 (20 morphine bottles)
This was a bit more helpful, allowing the jurors to see all twenty of the bottles, and getting some idea of the quantity at issue. Similar demonstratives showed different quantities of the drug. While this was helpful and far more efficient than the several episodes of bringing out the bottles, there is a better way of showing the jury how much medication was used in this case, as compared to how much had been used in other cases. A little searching on the Internet provided a compelling idea for the closing argument, comparing 200mg to 5000mg: 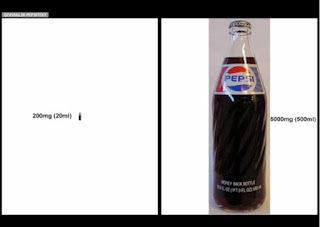 Fortunately, for the sake of organ transplantation programs and end-of-life care standards, Dr. Hootan Roozrokh was found not guilty on all counts.

Olympic hopeful Scott Shropshire was practicing his diving at the Heather Farm swimming pool in Walnut Creek, California, along with his team and coach. At the same time, at the other end of the pool, the Aquanuts synchronized swimming team was rehearsing their routine, under the supervision of their coaching staff.

The Aquanuts finished and dispersed about the pool, with one member swimming underneath the diving board. Shropshire could not see her and didn’t realize she was there. He dove, and as he was about to hit the water, she launched out from the side, directly in his path. Shropshire instantly became a quadriplegic.

With the Pool Supervisor on the witness stand, attorney Bill Smith of Abramson Smith Waldsmith questioned him as to why there were no lifeguards on duty at the time, why there were no dividers in place, and where the lifeguards would have been stationed had they been present. Mr. Smith prepared graphics showing various lifeguard zones, but the witness did not agree with the zones as laid out in the prepared demonstrative. As Smith continued questioning the witness, Smith put a diagram without the zones on the witness’s monitor. The witness indicated where a zone might be, and with TrialDirector and a few drawn circles, a new demonstrative had been created on-the-fly – at the witness’ direction. The demonstrative suddenly advanced to an admissible exhibit. 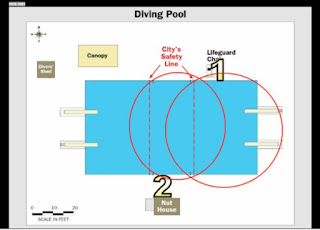 While this could have been done on a sheet of paper, it was extremely compelling when presented on the big screen. Plus, as a powerful trial exhibit, it would now make the trip into the jury room for deliberations.

In addition to these examples, consider the following tips for making your visual case at trial.

Make It a Habit

Indeed, there was a day when using all of this technology stuff was thought of as being a bit risky – that it might be perceived by jurors as too flashy or expensive. Assuming most jurors now have a TV and/or Internet access, this is no longer a valid argument. In fact, jurors often expect to be shown the evidence, rather than just hearing about it – regardless of the venue. Numerous post-trial jury surveys and interviews have shown that judges and jurors alike appreciate the efficiency and enhanced learning experience that technology can bring to the trial. So, how can you get started?

You can purchase TrialDirector or similar software for around $600. The learning curve is not too steep – at least to master the basics (which are the functions most-often used, even by experts). There are also certified trainers available nationally to assist you in getting up to speed quickly.

While you might consider using something you already have, such as PowerPoint, you will likely find yourself at a great disadvantage during trial. The primary strength of PowerPoint is also its weakness – it is designed to present information in a pre-determined linear format. Unfortunately, trials do not always (if ever) go as planned.

For less money than even the smallest of bailouts, you can try your case in much the same fashion as you always have, while someone else worries about putting a database together, cutting deposition impeachment video clips and presenting all of the evidence to the witness and jury. If you’ve ever been on the serving side of a witness getting solidly impeached via their video deposition, you know that this can be a game-changing, credibility crushing “golden moment.”

When displaying documents, as you discuss Exhibit 12, page 9, paragraph 4 with the witness, the paragraph is zoomed in, and the words “smoking gun” are highlighted for the jury. 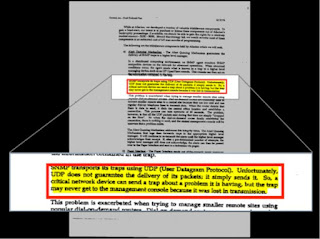 The only real differences in working with technology, especially when someone is assisting you, are the trial preparation and the manner in which the evidence is published to the jury.

If you are interested in getting additional information on visual support options, there are a number of highly-qualified ASTC members who would be happy to assist you.

While any of the examples shown might be produced and presented in some fashion without using trial technology software such as TrialDirector, there is simply not an easier, more efficient method of doing so. In both the Blake and Shropshire matters, the lead attorneys had never incorporated technology into their trial presentation. Each felt that their case merited having every available tool to help present their case efficiently and effectively, and were willing to try something new. Now, they won’t attempt to represent a client without it.