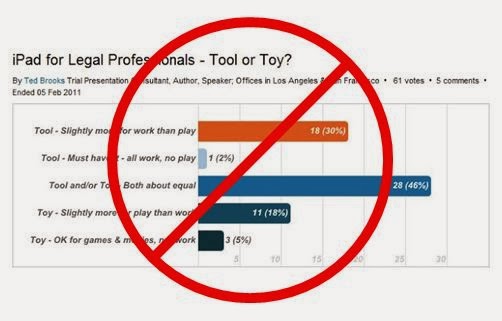 Although I started to write a piece analyzing the results of our monthly poll in the Trial Technology LinkedIn group, when I attempted to review the data, I’ll just say it was “missing.”

If you cannot read the LinkedIn post due to link issues, you will find it by clicking here.

Those who are members of the Trial Technology LinkedIn group are aware that we have had an ongoing monthly poll for over three years. I noticed a while back that the earlier poll data appeared to be missing. I finally looked into this further, as I was going to write a piece about the resulting data. Although it may not truly qualify as a “scientific” study, we’re talking about a decent amount of very relevant information, collected from group members over 36 months. Looking at the poll data now, it goes back only 11 months.

So here is my little rant to LinkedIn, which I’ve posted on their forum. While I don’t expect to ever see the data again, hopefully they will at least consider my perspective before wiping out more data.

Although it’s nice that LinkedIn strives "to provide a simple and efficient experience," and that it "continually evaluate(s) how (its) current products and features are being used," the fact that the decision was made to retire the Polls app and flush all of the data with it, and without any advance notice to the users, is very disappointing. With any user-driven application, it would be safe to assume that some people might actually be using its features, and that they might actually be interested in the results of their work.

So, what is the current plan - will new polls be flushed periodically, or will the results remain accessible "indefinitely" - at least pending another decision to "remove a feature?"

With that, here is a bit of historical data they weren’t able to delete.

2/13/2011 Exhibit A: iPad App for Trial Presentation – As the wild, wild west of iPad app development was in full swing, yet another iPad app for Trial Presentation was released, Exhibit A. The results of the above-mentioned poll are shown at the end of the article, showing that group members were using their iPads as both a tool and a toy. I wonder if that has changed. Sounds like fodder for a new poll, although if you’re reading this a year late, the data may no longer be available.

1/10/2013 Inside Trial Technology on LinkedIn  - This piece discusses the Trial Technology LinkedIn group, and in fact promotes the poll feature of LinkedIn. The article shares the poll results of what was the “most popular poll” at the time -- Which software do you use for trial presentation?  Maybe another one to revisit…

Your comments and thoughts on this topic are welcome!