As I have explained in the past, this blog is my passion and hobby, but not my profession. As a result, you will periodically see uneven posting schedules at times, when professional demands require more time. Even so, although the level of traffic during the longer gaps decreases somewhat, it still remains strong. The best compliment I can get on my blog is that people read, enjoy, and share. Thanks for your ongoing support!

Here are few of the most popular articles recently on Court Technology and Trial Presentation. If you're interested in a topic you don't see here, try the Search feature. If it has to do with trial presentation and technology, chances are you'll find something on your topic.

Courtroom Projectors, Screens, and Monitors A few tips on what works in the courtroom, and what doesn’t. Should you rent or buy? Do courtrooms already have everything you need? 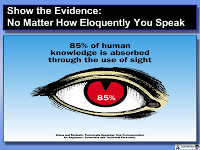 Presenting Evidence in Trial - The Belli Seminar This article features the importance of visual evidence presentation. The best in the profession seem to share a common thread. Comments like “It looks too flashy,” or “I want the jury to focus on me” just don’t make much sense these days.

iPad Apps for Lawyers: iJuror, JuryTracker, Jury Duty A few top apps for voir dire and jury monitoring are covered here. There is a great deal of interest in bringing the iPad to trial, and it weighs less than a box of books and legal pads.

Can't See the Forest For the Trees During preparation for trial, a team learns the fine details and strengths of a case. What is often overlooked during trial is that jurors may not understand even the most basic elements of the case. To make assumptions in this regard may lead to disaster.

Comparison of TrialDirector, Sanction, and Visionary I am often asked which is better, or which do I prefer. Although my personal preference is TrialDirector, I am always happy to use whatever the client needs. Trial presentation software is a tool, and is only as good as the person working with it.

I had the honor last week of speaking at the Belli Seminar, an event organized by the Santa Clara Trial Lawyers Association, held at the Lincoln Law School, in San Jose. A day-long collection of non-stop 10-minute presentations, the seminar was moderated by none other than Melvin Belli Jr., and featured many well-known speakers, including Mark Geragos, Jury Consultants Amy Singer and Tammy Metzger, Tommy (Prince of Torts) Malone, Gerry Spence Trial Lawyers College President Jude Basile, and several top Plaintiff’s attorneys from California, Washington, Texas and New York. I can honestly say that this was one of the best and most educational events I’ve ever attended.

While any of the faculty could have easily covered the entire day on their own, the unique part of this program was that it truly forced each presenter to give the “best of their best,” since we all had only 10 minutes for each presentation, followed by five minutes for questions. My notes and “take-homes” are likely nearly identical to what they’d have been, had each speaker covered an hour or more.

What was interesting to me was that many of the presentations covered similar topics, but each showed a unique approach to the same end goal. Some used no technology at all, while others did. One interesting point brought out by one of the speakers was the desire to put an “image” into your jurors’ minds. I helped to demonstrate how to do that, and how to make sure it’s the right image, and that they all have the same image in mind. Carefully-crafted words often cannot replace a visual display of the evidence.

Jury Consultant Tammy Metzger covered the Reptilian Brain and reading micro-expressions. This was fascinating stuff that you may not even notice – even though you can “feel” the emotions of others around you.

Jury Consultant Amy Singer discussed the Casey Anthony trial, and how she directed the analysis of over 40,000 social media followers. She also shared a demonstration on how to do it even on smaller or low profile cases.

The program wrapped up with a brief Voir Dire of 8 jurors. This was a great learning experience, as was the discussion afterward.

I’ve never seen this type of program presented before, but leave it to Silicon Valley to drive the innovation. For the record, I was the only one presenting from my iPad (using TrialPad). When I asked, well over half of the attendees raised their hands, claiming to own an iPad. The Silicon Valley Plaintiffs Bar is certainly ahead of some other groups I've presented to. Thanks to Ed Vasquez for putting this together and inviting me. After a long week in trial, it was time well spent.


Thank you so much for presenting at the seminar.  The visuals are huge in what we do, and Mel Belli was a pioneer in Demonstrative Evidence.  Please keep in touch.  The feedback from our members has been hugely positive.

Many courtrooms today are set up with nearly everything you’ll need to simply plug in to the system and present your evidence. Judges generally encourage and appreciate the use of technology, since it tends to speed up the trial process, and has the added benefit of making the evidence easier to follow and understand for the jury. Although it is sometimes assumed that jurors will think electronic trial presentation looks too flashy, or that your client has spent a lot of money, post-trial surveys prove that this is not the case.

Projector
A popular article I’ve written covers one simple item: Best Projectors for Courtroom Presentations. I discussed there that you would need a minimum of 3000 lumens in a well-lit courtroom, and that you should avoid anything with DLP technology, since it will turn your nice yellow document highlighting to a pea-soup green color. There is no point in using inferior equipment when the exhibits cannot be clearly viewed by the entire jury.

Another issue today would be whether to purchase a wide-screen or standard projector. Although it would appear that the wide-screen, or 16:9 format already dominates the television market, it’s not quite there when it comes to available screens. Most screens you’ll find are standard (or 4:3) format, meaning you’ll end up with a blank band on top of and below your exhibits. Fortunately, there are some models that will accommodate either. I would recommend considering one of those.

Also, you might want to consider a short-throw lens. Some projectors come with them, and some have optional extra lenses which may be used. The benefit here is that the projector may be placed only a few feet from the screen, making it less likely that you will continually be walking between the screen and projector. Although you probably won’t notice when part of the image is on your suit, others will, and it is very distracting. 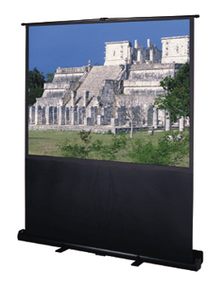 Screen
Many courtrooms have a screen installed. Some are large enough, and some were apparently installed by the lowest bidder, regardless of size. Generally, you’ll want at least a 7 or 8 foot screen in a courtroom. One model I like is the InstaTheater, by DaLite. It stores in a tube, and does not require a tripod, so it fits well in a congested courtroom. It may also be placed on top of a table, if necessary. 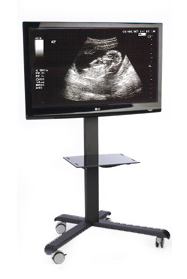 Large Plasma or LCD Monitors
Another option you will find installed in some courtrooms is a large monitor, instead of a projector and screen. While they may be adequate for watching the news, sports, or movies at home, when you consider that they are only about half as large as a standard screen, you will likely find that they’re not really the ideal solution for trial presentation to a large audience. You can use more than one, but you also lose the effect of having one common focal point for all to view, and you can forget about using a laser pointer on it. Some cases require the color and clarity that only this type of monitor can provide.

Individual Monitors
You may want to install separate monitors for the Judge, witness, and each counsel table. This will allow everyone to view an exhibit right in front of them, which is necessary in some courtrooms, where not everyone will have a clear view of the screen. The added benefit is that this system may be used to preview evidence before it has been admitted into evidence, leaving the projector off. Once an exhibit has been admitted, the projector is then turned on for the jury.

Audio System
Don’t forget this critical detail if you have anything that you want others to hear. One example that is frequently overlooked is the videotaped deposition. Unless you have a decent speaker set connected, nobody will hear the audio from your laptop.

Switcher
In order to control which party has access to the courtroom system, some sort of switching device must be installed. A matrix switch or switchable distribution amplifier may be used for this purpose. Some judges will also want their own “kill switch,” in order that the might disable the projector if necessary, although this was more common several years ago, when the use of technology was new and untested.

Gaffer’s Tape
Don’t even dream about using anything but professional gaffer’s tape to secure all of your electrical, video, and audio cables. Gaffer’s tape is designed to not leave any residue, nor to pull the fabric from the court’s carpeting. Duct tape will certainly hold the cables in place, but you might find yourself replacing the carpeting if you try using it.

Equipment Rental or Purchase
Most Trial Presentation Consulting firms have all of this available, which means that you don’t have to ship the equipment, install the system in the courtroom, tape cables, and make sure that everything is in good working order. You can also purchase and handle of this yourself, if you’re so-inclined. No matter whether you rent or purchase, make sure you install and test it before trial. You and your client do not want the Judge to tell you that if you can’t make it work, you’ll not be able to use it.