Each day during trial, I bring not only my laptop(s), but I am also prepared to print, scan, and perform a variety of other essential functions – all in court. In this article, I will offer a brief review of the Canon PIXMA iP100 printer. 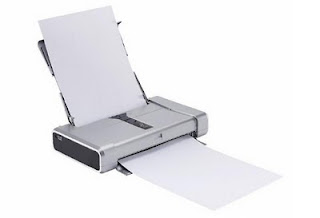 I have used the HP 450 and 460 portable printers, and was about to purchase a new HP 470 printer, when I decided to do a little bit of research before dropping another $250 or so on the latest model. The primary reason for doing this was that I’ve actually purchased two or three 450’s and one 460 – and NONE OF THEM WORK! Actually, the reason I bought the 460 a couple of years ago was because the 450’s would do nothing more than pass a blank page through with any print command – even a print-test page. It appears that the drivers just won’t work any longer. I have no idea why, nor do I care to waste more of my time attempting to figure out what happened and why. According to the reviews I read, it seems that I am only one in a multitude of others with the same issue. Not good.

The HP 460 apparently suffered from some sort of traumatic injury (did I mention I carry these things in my rolling carry-on?) during my daily walks to court. All it does now is shake and rattle a bit, and then lights up to indicate it’s having a paper feed issue. Not good.

So, I looked at alternatives, and the Canon PIXMA iP100 seemed to be the next logical choice. I couldn’t really find much in the way of reviews, which I now guess is a good thing. Did I test this thing before going to court? You bet I did.

During my last trial (one month in the U.S. District Court in S.F.), I hauled in the trusty new Canon in case we would need to print exhibits, outlines, and emails (all of which we did) in court. This little printer performed flawlessly. It (like the HP) is a little noisy for use during the trial, and is best used during a break. A battery pack and Bluetooth capability are also available, although I’m sticking with the USB.

This printer doesn’t actually look all that durable, as it is made of lightweight plastic, but the design appears to work. It is a little smaller than the HP also, which is another benefit. The paper feeder also works better and holds more paper. I’m not sure how the ink will hold out yet, but I’ve made it through one trial without changing cartridges.

The bottom line on the Canon PIXMA iP100 is that I would highly recommend it to anyone needing a small, lightweight and portable printer that will actually work when you need it. At about $250 list (about the same as the HP), it is well worth the money spent.