Donald Trump loves me! It is certainly clear that he can spot a winner – a leader in the profession, at the top of their game. I'm sure that describes me, and must be why he has requested to join my massive and influential LinkedIn network (of a moderate, real-world scale, of course).

I feel like I’ve been personally chosen by Mr. Trump as the next big winner of The Apprentice! Fresh off his dominating performance on Super Tuesday, The Donald took a break from his busy schedule to send me this request, which I received on Wednesday, March 2, at 7:27 p.m. PST. It would have been nearly 11:00 p.m. EST, but I’m sure that like me, he often works some long hours.

Although thrilled beyond belief (well, quite a bit beyond, actually), I thought it might be prudent to check Mr. Trump’s credentials before accepting his request. I know he’s a billionaire, real-estate mogul, presidential candidate and all that, but what does he give up on LinkedIn? I mean, it’s obviously his real photo. Or is it?

Authenticating Social Media Profiles
I’m not going to cover every possible way you might check and verify social media profiles, but I will offer a couple quick and easy suggestions, and I will caution against accepting every random request from people you don’t know. Not that LinkedIn networking is a bad thing, and I have generated some business as a result of using it, but hopping blindly down the trail might not be the best option. Ideally, there should be some prior “connection” for this person to have located you. That might be through a friend or business associate, a fellow LinkedIn group member, or it could even be someone simply reaching out as a result of your marketing efforts (read: a good thing). Because of this, you don’t necessarily want to reject anyone you don’t know. They may know you, or could be interested in getting to know more about you.

PROFILE ANALYSIS
Although other social media apps such as Facebook or Twitter are similar in some respects, we’ll focus on LinkedIn here. The first place to look is their profile page. Realize that you may be limited to a “public” or “not connected” view of the page. There is likely more info once you’re in the same network, but this view usually shows the basics – at least enough to get a rough idea of who is contacting you. For this reason, you should make sure to include enough info in your “public” profile that someone can identify you, or can at least learn a little about who you are.

Poor Donald Trump. I saw last night that he only had 25 LinkedIn connections. I know – he’s just very selective. That’s why he asked me. Now this morning, I find that he has already DOUBLED his network, increasing it to 51 members! That is the power I’m talking about.

Unfortunately, one of the newer additions is connected with someone I know (as noted in the third-level connection shown in the top right corner). I hope it’s not an attorney, or someone in the legal profession. We’re supposed to know better, and in fact, may be ethically required to do so.

With his private jet to shuttle him, Trump gets around. In fact, I just noticed that between last night and this morning, he has changed his LinkedIn profile location from Kansas City, Missouri (see email) to Oskaloosa, Kansas. Running a quick search shows it’s only about 50 miles between the two, but it’s a different State! Okay, so a quick review begins to look a little suspicious. It’s not always so obvious though. Sometimes, it may just look odd that a Chinese iron mining executive has sought you out as a potential connection (has actually happened to me). Probably wants you to send him some money via Western Union, too.

IMAGE SEARCH
So let’s take a closer look at the image. Right click and run a search, and see what turns up. In my experience, this will often nail a fraud, as the results may show the actual profile and identity of someone else. Oh, the power of the Google search. Other search engines (e.g., Bing and Yahoo!) have similar capabilities as well.

In this case, we find that it does indeed appear to be a legitimate photo of Mr. Trump, except that it has been widely used by the media, meaning it is easy to get. In fact, it has been used over 1400 times. 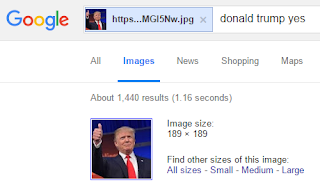 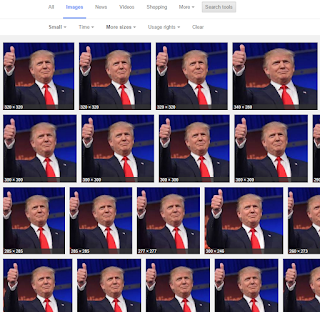 My point here is that anyone in the legal profession MUST take extra care when dealing with social media. You never know who might be on the other end of the internet, or why they might be attempting to gain additional info on you. Remember: What happens online, stays online.

Let me know if your firm or group is interested in a related CLE presentation. We offer a limited number of CLE presentations at no cost to qualifying groups, generally focused on technology in trial and visual communication.
Email: tbrooks@litigationtech.com