Comparison of TrialDirector, Sanction, and Visionary (plus iPad and legal video info)

﻿This past weekend, I enjoyed the opportunity of presenting at the National Court Reporters’ Association Trial Presentation Symposium, in Atlanta, GA. I have been involved in this program for the past few sessions, and have enjoyed the opportunity to share a bit of knowledge with a full class of participants, along with the bonus of networking with a few of the top names in the business, including Trial Consultants Robb Helt (Arkansas), Tim Piganelli (Arizona), Joe Cerda (Texas), with a short topic on court procedure by Steve Crandall, and headed up by Brian Clune. I'll also include my name here (Ted Brooks) as your California connection. (These links are to each speaker's email) 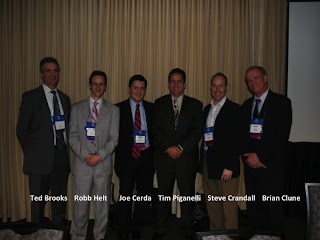 ﻿
Topics that were covered included the top 3 trial presentation software packages, TrialDirector, Sanction II, and Visionary. When compared side-by-side, TrialDirector appears to be the most up-to-date of the three, having been optimized for Windows 7 and a high-powered laptop. Sanction Solutions is about to release Sanction III, reportedly within the next few weeks or so. I would expect it to be a drastic improvement over Sanction II, which is not necessarily a bad product, but it hasn’t been updated in quite a while, and appears a bit dated. Visionary is currently in version 8, and looks like it could use a little “refresh” as well.  I will be very interested in trying the next version of Sanction, and will be writing an in-depth review of that, once it is released. I haven’t heard when we might expect a new release from Visionary Legal Technologies, but I would assume they are working on it. There are certainly other trial presentation software programs on the market, including some proprietary applications (which I would not recommend, since they are essentially locking you into a vendor), but these are the top 3, listed in order of market share.

Any of them will do the job far better than attempting to present evidence using something like hard copies of your exhibits with an ELMO (electronic document camera) or PowerPoint. When they were compared on three screens at the same time, TrialDirector was clearly ahead of the pack – at least for now. Regardless which one you prefer, it was also demonstrated why it was not a good idea for an attorney to attempt to run a trial presentation program while trying to focus on examining a witness and connecting with a jury. While none of these programs are difficult to learn, trial presentation is a full-time job, and looks best when handled by someone who does it frequently.
iPad apps for trial presentation were also covered, including TrialPad, Evidence and Exhibit A. I have thoroughly reviewed each of them on Law Technology News and this blog, and have come to the conclusion that although they are indeed very cool, and it could look pretty slick running your trial presentation with an iPad, they just don’t have nearly enough horsepower for the larger trial, and they all suffer from the limitations of the iPad. The risk v. benefit analysis of using an iPad for trial presentation doesn’t add up at this point - at least unless it is a small and manageble matter, or there is some special reason it is needed.
The final session on Sunday covered the use of High Definition video in the legal arena. I found this very interesting, especially since we had a panel of notable Certified Legal Video Specialists (CLVS) who shared the latest news on how they are using it, including Bruce Balmer, John Garnett, Ed Foppe, and Gilley Delorimier. Joe Cerda also shared his recent experiences with HD video for shooting depositions, and then displaying in trial.
It was pointed out that you need to remember that there is a difference between HD and wide-screen. While often combined into one, they are two different attributes. File size remains a critical concern, and even more so with the new HD formats. The other critical concern is that wide-screen format (16:9) is not practical for use in depositions, since there is very little need to expand the view to include the attorneys, coffee cups, and stacks of exhibits on the table. That stated, regardless of whether we can find a decent method of storing such massive files, the standard 4:3 aspect ratio remains the preferred format for deposition video. I will add that the latest version of TrialDirector now supports wide-screen display for trial presentation. Some of our courts are already using wide-screen flat panel monitors, so it is much nicer to use the full screen, rather than have the gray side boxes cropping the image. The problem here is that court projectors and screens are still primarily 4:3 aspect ratio. For now, it appears that most everyone agrees, a 4:3 MPEG1 video remains the standard for trial presentation of deposition video.
Overall, the comments were very positive, but also offered ideas on how the program might be improved. A couple of nice comments were, "You are clearly the industry leader as it relates to trial presentation," and "This symposium was AWESOME. Thanks for giving so much back to the industry guys!" 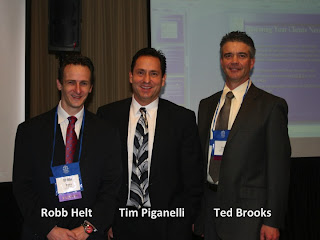 ﻿
If you follow any of the LinkedIn or Yahoo groups for trial technology and/or legal videography, you will likely recognize most of the names I've mentioned, as each of them has helped us all by sharing their knowledge and experience. The NCRA Trial Presentation Symposium is certainly a great opportunity to learn a few new tricks, and to meet and greet a few of the stars of our profession (and no, I am not arrogantly referring to myself).
LinkedIn Trial Technology Group
Yahoo Trial Technology Group
Yahoo Legal Videography Group